What hides in the dark… 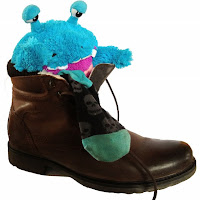 Sent to bed, with a kiss and cuddle
Climbing the stairs, his head all a muddle

It’s dark at the top, four steps to his room
Light switch on the wall; hidden in gloom

What lies in the darkness, his mind playing tricks
Is there a monster in there, or an evil old witch

Running back down, he lands in mums lap
There’s a monster upstairs, and he’s taking a nap
If I walk in the room, he’ll awake from his sleep
It’ll be me for his dinner, it’ll be me that he eats

“There no such thing, monsters aren’t real”
Nothing is there to make you his meal

I’ll take you upstairs and switch on your light
You’ll see nothings there, it's all alright

Climbing the stairs, making a noise
The monster gets scared, and hides with the toys

Tucking him in, getting ready for sleep
Mum says “Sweet dreams.. not another peep”
Off with the light and closing the door
It’s dark now in here… but he can just see the floor

In the dark shadows, is something there…
Something is moving, something covered in hair

Frozen in bed, not wanting to move
He senses it skulking, down by his shoes

He shouts out load, calling for mum
There’s a monster in here, can you please come!

Checking his room, opening doors
Under the bed, till there’s nothing more
His mum reassures him, “They don’t exist!”
“No monster in here, nothings been missed!”

Leaving the room, the door now ajar
A little light shining, so he now sees afar

Inside his shoe, a head pops out
A scary little head with a big fat mouth

Sharp scary teeth, they could chew through rock
But stuffed in his mouth… the little boys sock

Plucking up courage he stammers to the beast
“A.A.A.Are you eating my sock, is it some kind of feast?”
Errrmm… yes says the monster, I’m sorry to say
I’ve eaten your sock, I eat at least one a day

There’s nothing to be scared off, we all eat socks
Except for Big Fred… he prefers frocks!

We like them well worn, a good day or two
Real nice and cheesy, between me and you

Oh, that explains it the little boy cries
One socks always missing when hung out to dry
Mum says I’ve lost it, she always blames me
Now I know where it’s gone, it’s in your belly

So now that you know, monsters are really true
But it’s your socks that they want; it’s not really you

But at least you’ll be safe… there’s nothing to shock
Monsters don’t hurt you, they just want your socks
Posted by Mark Sage at 05:44